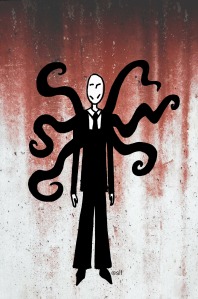 On Saturday, May 31st, two 12-year-olds attempted to kill their best friend in a wooded park. By a miracle, this young friend who was stabbed 19 times was able to crawl to a road and retrieve help. One of those stab wounds nearly missed her heart.

Many would ask, “Why?” To answer this question, they were doing it in proxy of Slender Man to prove that he was real. For those of you who are not familiar with Slender Man, he is an alleged paranormal figure developed in the web forum called Something Awful by the creator Victor Surge (real name – Eric Knudsen).

Believers in the Slender Man tie his appearances with many other legends from around the world. Victor Surge, the creator, shared that many of his written imaginations were brought on by his favorite author Stephen King. Although he never intended his work to go viral, many fans added to his story and so began the supernatural entities of this horror story. END_OF_DOCUMENT_TOKEN_TO_BE_REPLACED